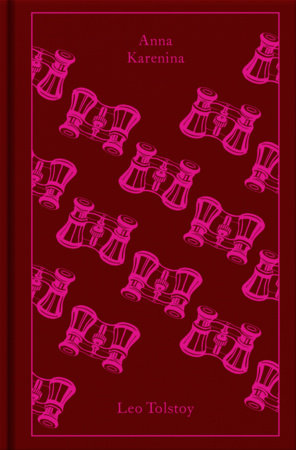 Tolstoy's epic novel of love, destiny and self-destruction, in a gorgeous new clothbound edition from Penguin Classics. Anna Karenina seems to have everything - beauty, wealth, popularity and an adored son. But she feels that her life is empty until the moment she encounters the impetuous officer Count Vronsky. Their subsequent affair scandalizes society and family alike and soon brings jealously and bitterness in its wake. Contrasting with this tale of love and self-destruction is the vividly observed story of Levin, a man striving to find contentment and a meaning to his life - and also a self-portrait of Tolstoy himself. This acclaimed modern translation by Richard Pevear and Larissa Volokhonsky won the PEN/ Book of the Month Club Translation Prize in 2001. Their translation is accompanied in this edition by an introduction by Richard Pevear and a preface by John Bayley 'The new and brilliantly witty translation by Richard Pevear and Larissa Volokhonsky is a must' - Lisa Appignanesi, Independent, Books of the Year 'Pevear and Volokhonsky are at once scrupulous translators and vivid stylists of English, and their superb rendering allows us, as perhaps never before, to grasp the palpability of Tolstoy's "characters, acts, situations"' - James Wood, New Yorker

"One of the greatest love stories in world literature."
--Vladimir Nabokov

Leo Tolstoy (1828–1910) was born in central Russia. After serving in the Crimean War, he retired to his estate and devoted himself to writing, farming, and raising his large family. His novels and outspoken social polemics brought him world fame.
Photo © Library of Congress
Learn more about Leo Tolstoy
Coralie Bickford-Smith is an award-winning designer at Penguin Books, where she has created several highly acclaimed series designs. She studied typography at Reading University and lives in London. Learn more about Coralie Bickford-Smith

All happy families are alike; each unhappy family is unhappy in its own way.
All was confusion in the Oblonskys' house. The wife had found out that the husband was having an affair with their former French governess, and had announced to the husband that she could not live in the same house with him. This situation had continued for three days now, and was painfully felt by the couple themselves, as well as by all the members of the family and household. They felt that there was no sense in their living together and that people who meet accidentally at any inn have more connection with each other than they, the members of the family and household of the Oblonskys. The wife would not leave her rooms, the husband was away for the third day. The children were running all over the house as if lost; the English governess quarrelled with the housekeeper and wrote a note to a friend, asking her to find her a new place; the cook had already left the premises the day before, at dinner-time; the kitchen-maid and coachman had given notice.
On the third day after the quarrel, Prince Stepan Arkadyich Oblonsky — Stiva, as he was called in society — woke up at his usual hour, that is, at eight o'clock in the morning, not in his wife's bedroom but in his study, on a morocco sofa. He rolled his full, well-tended body over on the springs of the sofa, as if wishing to fall asleep again for a long time, tightly hugged the pillow from the other side and pressed his cheek to it; but suddenly he gave a start, sat up on the sofa and opened his eyes.
`Yes, yes, how did it go?' he thought, recalling his dream. `How did it go? Yes! Alabin was giving a dinner in Darmstadt — no, not in Darmstadt but something American. Yes, but this Darmstadt was in America. Yes, Alabin was giving a dinner on glass tables, yes — and the tables were singing Il mio tesoro, only it wasn't Il mio tesoro but something better, and there were some little carafes, which were also women,' he recalled.
Stepan Arkadyich's eyes glittered merrily, and he fell to thinking with a smile. `Yes, it was nice, very nice. There were many other excellent things there, but one can't say it in words, or even put it into waking thoughts.' And, noticing a strip of light that had broken through the side of one of the heavy blinds, he cheerfully dropped his feet from the sofa, felt for the slippers trimmed with gold morocco that his wife had embroidered for him (a present for last year's birthday), and, following a nine-year-old habit, without getting up, reached his hand out to the place where his dressing gown hung in the bedroom. And here he suddenly remembered how and why he was sleeping not in his wife's bedroom but in his study: the smile vanished from his face, and he knitted his brows.
`Oh, oh, oh! Ohh! ...' he moaned, remembering all that had taken place. And in his imagination he again pictured all the details of his quarrel with his wife, all the hopelessness of his position and, most painful of all, his own guilt.
`No, she won't forgive me and can't forgive me! And the most terrible thing is that I'm the guilty one in it all — guilty, and yet not guilty. That's the whole drama,' he thought. `Oh, oh, oh!' he murmured with despair, recalling what were for him the most painful impressions of this quarrel.
Worst of all had been that first moment when, coming back from the theatre, cheerful and content, holding a huge pear for his wife, he had not found her in the drawing room; to his surprise, he had not found her in the study either, and had finally seen her in the bedroom with the unfortunate, all-revealing note in her hand.
She — this eternally preoccupied and bustling and, as he thought, none-too-bright Dolly — was sitting motionless, the note in her hand, looking at him with an expression of horror, despair and wrath.
`What is this? this?' she asked, pointing to the note.
And, in recalling it, as often happens, Stepan Arkadyich was tormented not so much by the event itself as by the way he had responded to these words from his wife.
What had happened to him at that moment was what happens to people when they are unexpectedly caught in something very shameful. He had not managed to prepare his face for the position he found himself in with regard to his wife now that his guilt had been revealed. Instead of being offended, of denying, justifying, asking forgiveness, even remaining indifferent — any of which would have been better than what he did! — his face quite involuntarily (`reflexes of the brain', thought Stepan Arkadyich, who liked physiology) smiled all at once its habitual, kind and therefore stupid smile.
That stupid smile he could not forgive himself. Seeing that smile, Dolly had winced as if from physical pain, burst with her typical vehemence into a torrent of cruel words, and rushed from the room. Since then she had refused to see her husband.
`That stupid smile is to blame for it all,' thought Stepan Arkadyich.
`But what to do, then? What to do?' he kept saying despairingly to himself, and could find no answer.