Celebrating the 50th Anniversary of the Beatles YELLOW SUBMARINE!

By Caroline O'Connor | May 14 2018 | AllGeneralGiftPop Culture

The original film was restored by hand, frame by frame instead of using automated software.    The film was something of an extension of an animated TV series originally running for 3 seasons from 1965 – 1967 on Saturday mornings on ABC.    The 39 episodes placed animated versions of the Beatles into wacky situations built around their songs – 2 of which were featured in each installment.”

The movie was a success in 1968, but has never had much of a life since then.  This is a story that appeals even to young children, but it also has a knowing, funny style that adds an undertow of sophistication. The narration and dialogue are credited to four writers (including Love Story‘s Erich Segal), and yet the overall tone is the one struck by John Lennon in his books In His Own Write and A Spaniard in the Works.

**From the LA Times, Randy Lewis 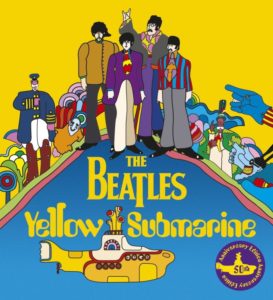 JAMES AND THE GIANT PEACH, WITH TAIKA AND FRIENDS
May 21 2020 | AdultsAllblogChildren'sGeneralGiftVirtual Events

Roald Dahl teams up with Academy Award-Winning Filmmaker Taika Waititi to present “James And The Giant Peach, With Taika And Friends”! This fundraising story-telling series will be told in 10 installments and will be released on the Roald Dahl YouTube channel every Monday, Wednesday and Friday at 1pm EST / 10 am PST. 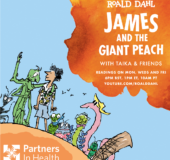 JAMES AND THE GIANT PEACH, WITH TAIKA AND FRIENDS

JOIN THE KNOPF DOUBLEDAY PUBLISHING GROUP NEXT WEEK:   TODAY: FRIDAY, MAY 15: #ShelfCare: Your photos of what you’re reading, watching, listening to go up today! Post along with us by tagging your imprint of choice and using #ShelfCare – don’t forget to check our Instagram stories on Doubleday, Knopf, and Vintage/Anchor throughout the day. 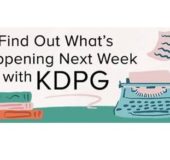